SpotOn Color users are probably pretty used to gauging their print consistency by just the basic pass/fail metric. Perhaps they don’t even venture from this Verify screen (as seen below) where the control strip is measured. Maybe this screen has enough information for them. But maybe not.

We’d like to explain how the Visual Match Scorecard in SpotOn Color works at a higher level than just a pass/fail. 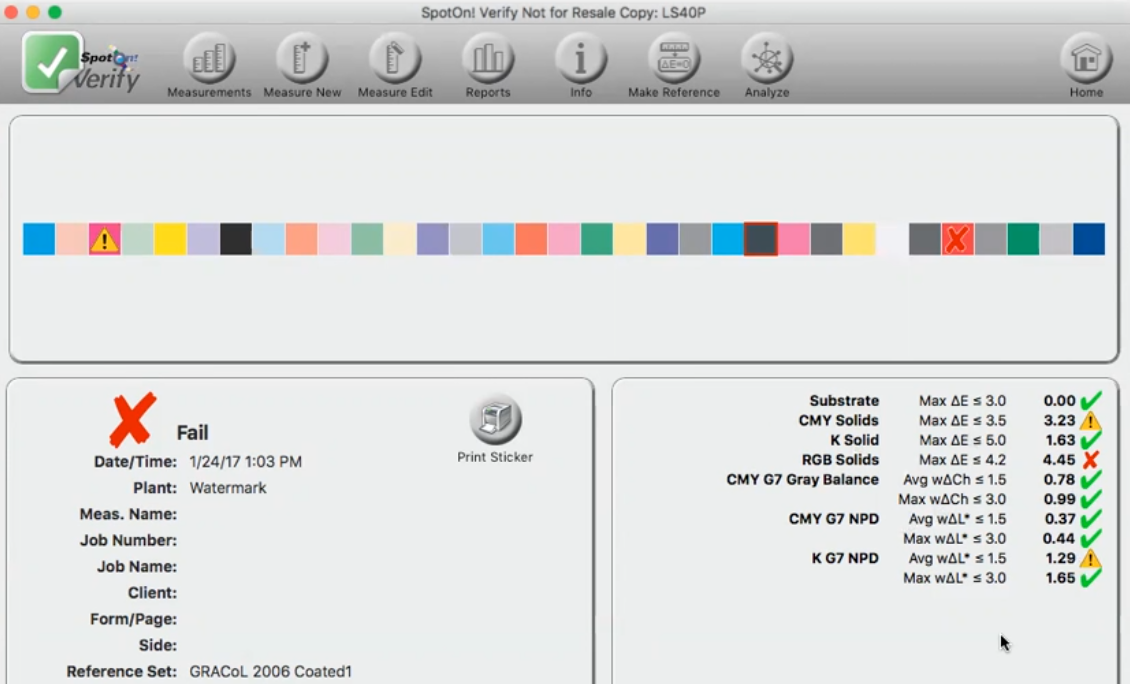 This was a verification of a press run, which is why it’s a single row control strip. The pass/fail metric is popular because it can show the press operator problems with CMYK or gray. But it doesn’t show you what the color is going to look like and that’s what makes Visual Match so much more effective. With Visual Match, you are getting an assessment based on the visual appearance between the print and the reference or proof.

For this particular press run, measurements were verified and compared to GRACoL® 2006 over time. Here’s a report of that press run over time using the pass/fail G7® Targeted metrics. 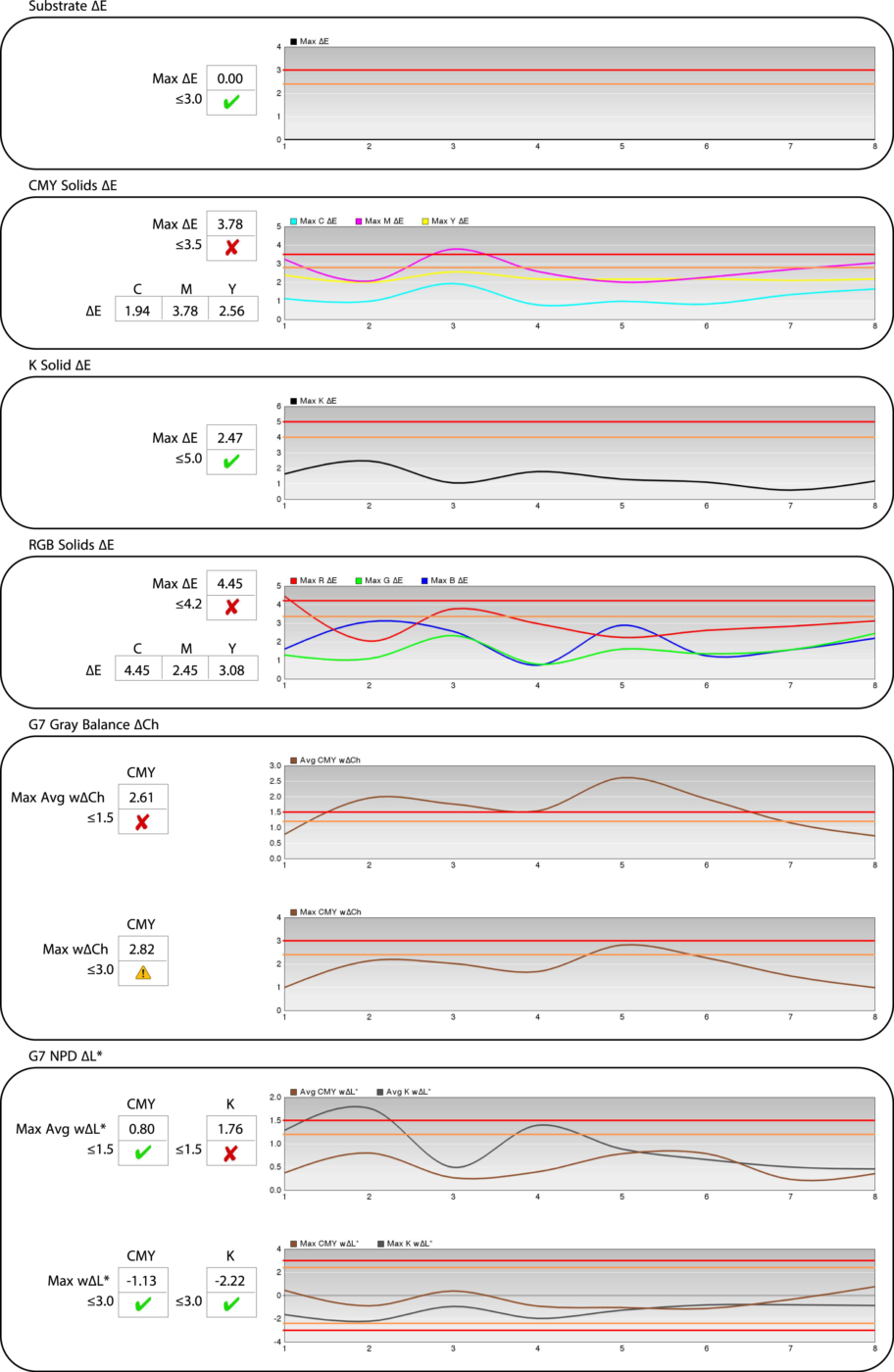 Pretty confusing as to how that press run went, right?

Now let’s take a look at a report of that very same press run using the Visual Match Scorcard.

The Visual Match Scorecard allows you to see the results of each measurement in a single metric, making it much easier to compare those measurements. In the report above, the measurement in yellow was the closest to GRACoL 2006.

So, by using the Visual Match Scorecard feature, we’ve gone beyond just the industry standard pass/fail metric. We’ve included the actual visual appearance into the verification process. The goal is to not rely on a bunch of pass/fail metric values that are great production control metrics (like solid ink density) but don’t inform us about the consistency or quality of the color. While press operators might like this approach for running an offset press, it isn’t helpful from the client perspective of needing their color to match what was printed last time.

Suppose you as a printer were tasked with printing another company’s business card with a brand color. Then three months later, they hire a new employee and need business cards for that person. You print the new cards and the brand color doesn’t match. Obviously, the client is not happy.

Sure, you can run the print with a control strip, measure it and compare it to a target to get a pass/fail. But the customer doesn’t care if the print passes when compared to GRACoL 2006. They care that the two business cards with the company brand color don’t match and are very visually different.

We recently published a blog post where we used a bull’s eye target to display the differences between two printers. A client had two printers of the same make and model. They used both printers to print the same job. Over time, the prints began to look visually different. When compared to GRACoL 2006, both printers passed. But when compared to each other by making one printer the reference point, they were far apart. That’s because the printers drifted in different directions. 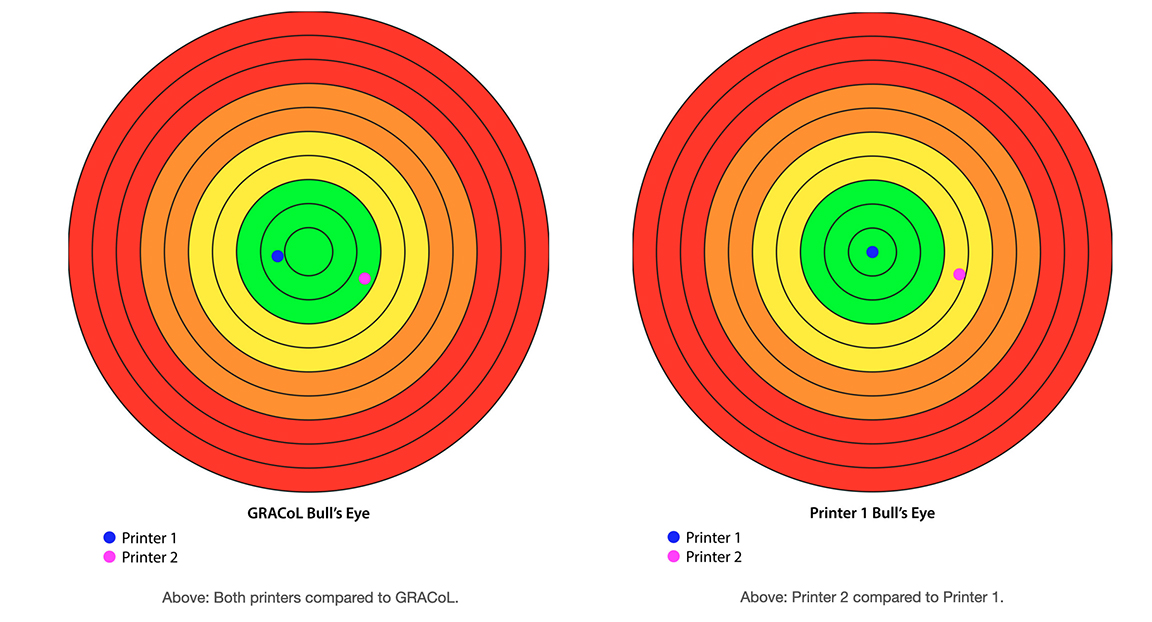 The point here is that while the individual printers may result in a pass status, they may still be unable to print consistent color compared to one another. If you are only relying on the pass/fail metric to GRACoL, you wouldn’t be able to identify the true visual difference between the two printers. Visual Match Scorecard provides a true visual assessment that helps you better “see” your color consistency. When the Visual Match score indicates a change in color accuracy, you can actually see that difference.

If you would like a personal online demonstration of how Visual Match Scorecard works, please contact us and we will get it on the calendar!