April 2014 — The Flexographic Technical Association (FTA) named All Printing Resources (APR) and SpotOn Press winners of its prestigious 2014 Technical Innovation Award. SpotOn Flexo Technology co-developed by the two companies, was the winner in the Prepress-Pressroom category. An elite team of industry professionals conducted the competitive judging, and the winners were announced at the annual awards banquet that took place on Sunday, April 27th at the FTA’s 2013 Annual Forum in Baltimore, MD.

On behalf of APR, we are honored to be recognized with the prestigious FTA Technical Innovation Award for our SpotOn Flexo software,” says David Nieman, President & CEO of APR. Collaborating with SpotOn Press has truly been a partnership of shared ideas resulting in a product that can save our customers time and money.

END_OF_DOCUMENT_TOKEN_TO_BE_REPLACED 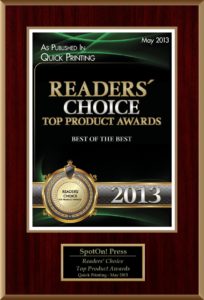 CHICAGO AND PORTLAND, ORE. – Sept. 8, 2013 – SpotOn, a leading developer of software for the printing and publishing industry, today announced that it received the Readers’ Choice Award from Quick Printing magazine in the category of Color Management Software for its SpotOn Verify product.

The inaugural Quick Printing Readers’ Choice Top Products Awards competition was conducted in early 2013 by gathering opinions from print service providers about what they considered to be the most significant products introduced to the commercial printing industry between September 1, 2011 and December 31, 2012. Readers were asked to vote for the products within each category that had the strongest impact on their businesses or created the most excitement in the industry, with only one winner in each category.

SpotOn Verify is a quality control tool that tracks the consistency of printing devices to an industry specification or a custom reference. It can be used to evaluate any printing process where a control strip can be printed and measured, and quickly identifies if a printing device is in or out of tolerance. SpotOn Verify also stores measurements in a database that can be filtered and searched, so recorded data can be recalled at a later date. It’s compatible with both Mac and Windows operating systems.

At PRINT 13 in Chicago, SpotOn launched the latest version of its award-winning software, with Verify 2.5 now available to new and current customers.  The key new feature of Verify 2.5 is the Visual Match Scorecard, which applies statistical probability to define an unambiguous score for comparing print-to-standard or print-to-print based on a visual match instead of pass/fail metrics and tolerances.  The score is divided into four visual zones: no visual difference (90%-100%); good visual match (80%-90%); fair visual match (70%-80%); and poor visual match (below 70%).