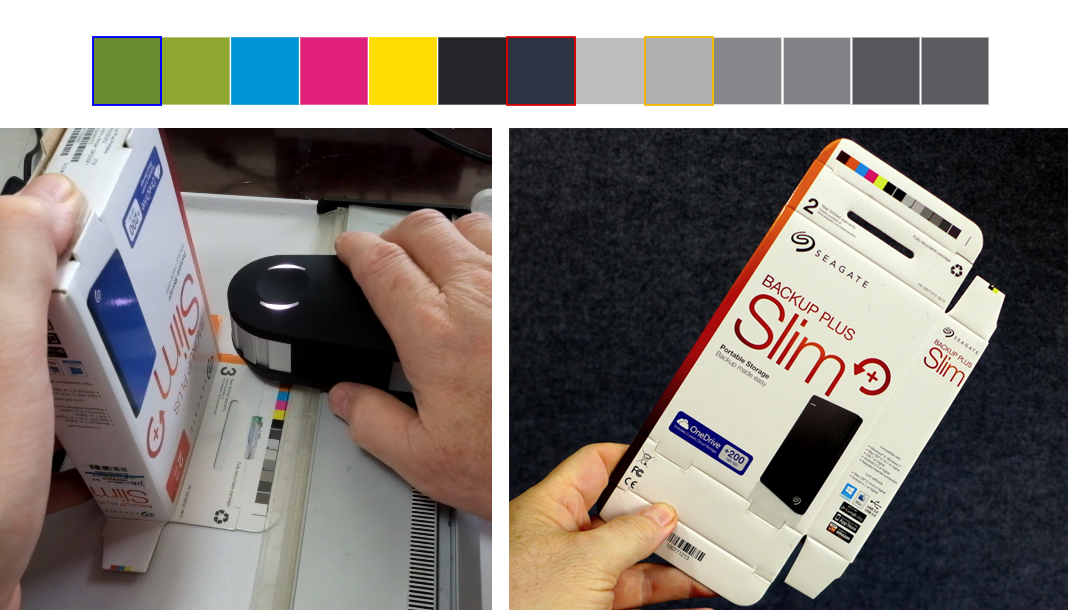 Eight years ago, Seagate Technologies asked me to help them with process control to qualify for G7 certification. They had six printing plants in China and Thailand which produced retail cartons for disk-drives.

They had difficulty with variations in the color appearance of similar product images that were printed at different factories. However, a single color house in the U.S. created the files and proofs for these images. But they had several runs of cartons rejected. When they reprinted those runs, it caused delays in the product release schedules and extra costs.

When doing press checks on new products, they asked the printer to produce a press sheet that matched the supplied proofs as closely as possible. They approved this best match. It became the master reference sheet for printing all subsequent SKUs that used those particular brand colors and product images.

The problem with this approach was that the printed product images approved at one factory were sometimes different from identical product images produced at other Seagate printers.

Finally, we began to certify each of the printers and train them to “print to the numbers.” The color differences between the master reference sheets at the multiple printing plants was greatly reduced.

When traveling to the States a few months later, I visited a Best Buy store. I took particular notice of the display of Seagate disk drives, which were cartons that I had approved several months earlier.

Looking at the same and similar cartons side-by-side, I noticed an obvious variation in color and balance. I took photos of the UPC codes to identify the printer and began an investigation.

As it turned out, the operators were not being vigilant in monitoring the color during the press run.

Taking Back Control of Process Control

First, we implemented a new sampling procedure. We pulled and time-stamped a percentage of sheets from the press run. Then, we measured them by the quality control department. We sent reports from each production run to the Seagate China office for review.

However, this procedure required extra effort and attention from the press operators and supervisors. After several months of monitoring, the printing consistency improved and variation reduced.

Second, we wanted to sample the individual cartons after creation. But once the carton was die cut from the press sheet, there was nothing to measure.

In other words, the press color bars were gone. To solve this problem, we built a 7-mm, 14-patch control strip hidden in the glue flap. We placed another control strip placed in the tuck-flap of the box.

Verification Software To The Rescue

First, we used SpotOn Color Verify software to check digital proofs. We realized that we could also use Verify to scan the printed control strips.

We took samples of finished boxes from the production runs and used Verify to quickly measure and record the color data. SpotOn Color’s reporting function helped us build a quality report and history for each of the production runs.

Moreover, the press operators also began using Verify during make-ready to measure the control patches. We wanted to be sure that they were hitting their G7 target values and assure that they would pass the QC department’s ‘pass/fail’ criterion.

It was an excellent tool that was very easy to use in production. We no longer use proofs as a color reference; we’re printing 100% ‘to the numbers’.

As a result, Seagate was quite pleased with the results. For the past six years, each of the factories have been using Verify to monitor color on press and in the quality control department.

Therefore, cartons from each of the factories and the images for each SKU were an excellent match to each other. All the printing plants were printing product images that were accurate and consistent from SKU to SKU and run-to-run. Color variation between boxes produced at multiple factories was practically eliminated.

Using SpotOn Color Verify to measure these simple hidden color control strips was successful. Therefore, we incorporated G7 data points that made it possible to monitor and improve packaging color reproduction across multiple facilities. Any brand hoping to improve color consistency of printed packaging could use this approach to improve quality and color fidelity.